The largely rural parish of Wrestlingworth and Cockayne Hatley lies on the eastern edge of the county adjoining
Cambridgeshire. A parish questionnaire found that many of the inhabitants liked living in the area for the
availability of walking and were also interested in the local natural environment and its wildlife, so a couple
of years ago a Parish Walking and Wildlife Group (PWWG) was set up to promote both these important aspects of
rural life. A monthly local walk was instigated, often looking at features of local natural history interest,
such as spring flowers, butterflies or fungi depending on the season. Bird boxes were the next item on the agenda
of the group and many of these have been successfully placed around the parish.

The next priority of the PWWG was to find a natural area that could be adopted by the group so that some active
management could be done to improve wildlife habitats in the parish. An immediate possibility was the neglected
patch of woodland and water set in intensive arable farmland about 1 kilometre south west of Wrestlingworth
village, known locally as the Gravel Pits (grid. ref. TL 248466)

Little was known, except that it was supposed to have been the place where local villagers were allowed to extract
gravel in the past and indeed it is shown on the first Ordnance Survey maps indicating that the ponds were well
established at least by Victorian times. Neither of the two farms surrounding the area seemed to claim the area
and further inquiries revealed that it was in fact owned by the Parish Council, was already registered as Common
Land and had an area of 0.6 hectares. So, with the permission of the Parish Council, this area has now been
declared a Parish Nature Reserve managed by the PWWG, to be known as the Wrestlingworth Gravel Pits Reserve.

View of the reserve area from the West 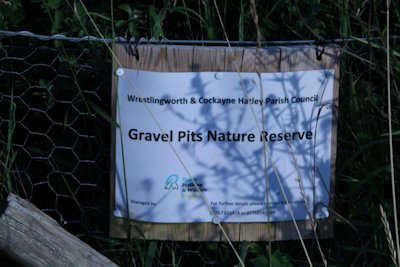 The reserve area (left) is an oasis of trees and water in an intensive agricultural setting. However, the
surrounding farmland is not as bleak as it looks. There are some rich hedges adjoining the reserve and a
set-aside meadow on the south side of the reserve contains a colony of Marbled Whites. The farmland surrounding
the reserve also holds useful populations of some of the declining farmland specialist birds such as Yellow
Wagtails and Corn Buntings.

Initially the reserve itself seemed uninspiring, largely consisting of nettles, high willow and sallow scrub,
and stagnant water. Some of the area had also been used by a previous landowner (almost certainly illegally) as
a general tip, which didn’t help the air of neglect of the site. It was planned to record the wildlife on the

site for a year before starting to manage it actively, but unforeseen events took a hand as the ponds in the
reserve completely dried out in the winter drought of 2011/20012. This was too good an opportunity to miss and
with the help of a local contractor it enabled good access and a start could be made in removing a few of the
large willow trees, allowing at least some light to reach areas where the ponds should have been.

Luckily for the reserve the drought eventually broke in April and it doesn’t seem to have stopped raining since.
This was excellent news for the ponds which have filled up nicely and their associated fauna and flora have
started to return and flourish, particularly as more sunlight is now reaching the water.

So what is present on the reserve? It’s still early days, but to date about 20 species of bird have been recorded
within the reserve area, including a roosting Barn Owl. There is a large active Badger set on the reserve, which
is left undisturbed, and Muntjac, Fox and Rabbits have also been sighted, but nothing smaller in the mammal line
has been recorded yet. Young newts have been seen in the ponds and opening up the ponds has also encouraged
dragonflies and other insects to colonise. Moth trapping has been carried out over 2 periods and so far 74
species have been recorded including 6 which are relatively uncommon in the county, Ruddy Carpet, White Satin,
Marbled Coronet, Dark Dagger, Dingy Shears and Cream-bordered Green Pea. It is notable that several of these are
willow feeders and are probably long-term residents on the reserve (Don’t worry there’s still plenty of willows
on the reserve, even after our winter management). 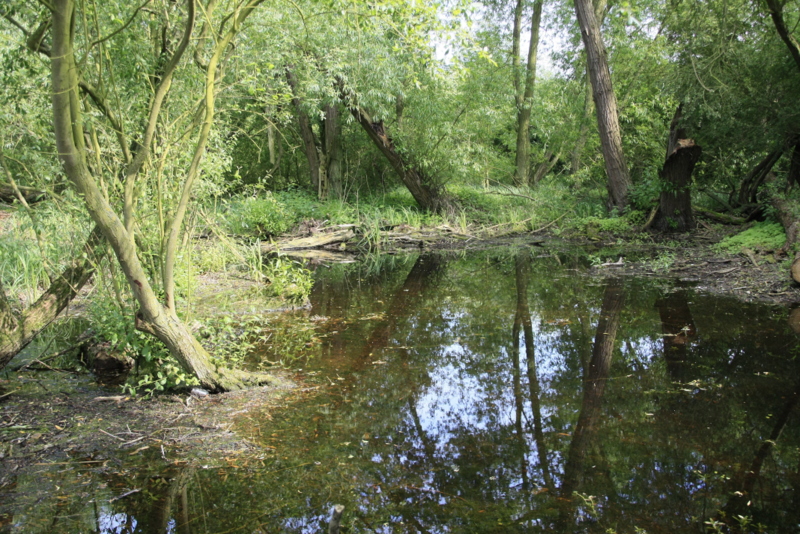 One of the reserve ponds after recent rain

Much has been achieved in the first year of this reserve. More recording is required, so if anyone wants to come
and look for their specialities, they are welcome (but access can be difficult and it’s always advisable to bring
boots). More management is planned for the coming winter and it is hoped that we will be able to open up the
reserve further to improve habitat and access and possibly establish a dipping platform for younger members of the
parish.